In the old days (like, two years ago), college football players weighing an early NFL Draft entry realistically had three choices: 1) Cross your fingers and declare; 2) Throw a possible lotto ticket in the garbage, cross your fingers and return to school; 3) Cheat, essentially, by taking money from your school (or someone working on your school’s behalf), break NCAA rules and play another year in college.

Now? Things have changed. Name, image and likeness is here, and its impact on the NFL Draft has already happened.

Ohio State quarterback C.J. Stroud and TCU receiver Quentin Johnston, both first-round prospects, waited until Monday’s deadline to announce their intent to enter the draft. Both noted how difficult the decision was. Neither mentioned NIL specifically, but one figures it’s at least forcing players of that caliber — and age — to stop and think for a minute.

Most of the expected early entrants for the 2023 draft beat Stroud and Johnston to it and declared. Not all of them, however. Though there are schools that have spent a lot of their NIL energy on high school recruiting, others have used it for roster retention.

Here’s a look at some of the best players to turn down the draft for another year in college (with legal money in their pocket). They’ll all be part of the 2024 NFL Draft conversation. As always, drop your favorite additions to this list in the comments below.

The 5-foot-8, 210-pound Blake Corum had a monster season for the Wolverines: 1,463 rushing yards and 18 touchdowns as Michigan won a second straight Big Ten title. However, Corum’s budding Heisman Trophy campaign ended early when he suffered a meniscus tear and MCL sprain during a win over Illinois in November.

In those aforementioned old days, Corum would have had little choice but to take his chances at the next level, despite the injury. NFL evaluators still mostly viewed Corum as a top-75 prospect for this upcoming class, so long as his knee didn’t show any lingering issues. (He’s expected to make a full recovery.) But now, Corum, per a team source, is looking at a substantial six-figure paycheck through an NIL deal next season, with the possibility (through off-field incentives) of pushing that number into seven figures. It’s possible he leaves school as a millionaire. Either way, he’ll eventually start his next chapter with a good chunk of money in his pocket.

That’s not all, though. Upon his return, Corum (and a handful of other Michigan upperclassmen) will have a chance to work with high-level players in real estate and finance. Valiant Management Group, the collective responsible for organizing Michigan’s “One More Year” fund, features a team of lead investors/advisers that includes the executive chairman and COO of Bounteous, a digital branding company that works with the likes of Coca-Cola, Domino’s, Chase bank and a host of other worldwide brands. Another adviser is Randy Winograd, president of Nimes Real Estate in Beverly Hills, Calif.

In a sense, Corum (and others at Michigan) become quasi-business partners/associates with high-dollar leaders in several high-dollar fields. Corum’s earnings this year will be well handled, and his relationships with these partners are now lifelong. This is the new world of college football.

Many, including yours truly, spent time Monday morning wondering whether Stroud was going to turn down top-10 NFL Draft money to return to Ohio State for another year (and what type of NIL package would have come with that decision). It was all for naught, as Stroud declared for the draft.

Olu Fashanu, however, faced a similar decision but with much less fanfare. The 6-foot-6, 308-pound offensive tackle would have had a top-10 grade from many NFL scouts (as he did from our draft guru, Dane Brugler) had he declared for the draft this year. He would have benefitted from what looks like a thin OT class. But Fashanu, who turned 20 just last month, also had just nine starts to his name when the 2022 regular season ended.

He opted to stay at Penn State for at least one more season. His frame and general athleticism as a pass protector could make him a star for years in the NFL, whenever he heads there.

If your NFL team needs an OT, the Ohio State-Penn State tape is appointment viewing.

LT Olu Fashanu (6-6, 320) is ridiculously talented for only 19 years old. One of the best NFL prospects in CFB.

NFL scouts project and ask their coaches to coach. Some NFL teams are set up very well for offensive line development, no matter how young and inexperienced a prospect is. Others are not. Fashanu would have heard his name called very early this spring, but the odds of his rookie year being productive or a disaster would have been anyone’s guess.

Now, Fashanu — who recently showed off the sponsored Teslas he and a few teammates will be driving in 2023 — will have a chance to go back to school, celebrate his 21st birthday and further develop as a prospect (and an adult) before entering a very grown man’s world.

Another player who, at the very least, turned down likely first-round NFL money to go back to school. Jared Verse, a 6-foot-4, 248-pound pass rusher, played his first three seasons in the FCS at Albany before he hit the transfer portal and became a hot commodity.

Verse was a 6-2, 200-pound high school sprinter who moonlighted as a tight end until Albany’s coaching staff squinted and saw the future. Despite playing through an injury in 2022, Verse put up nine sacks and 17 tackles for loss for the Seminoles in nine starts. Per PFF, he also recorded a rather absurd pass-rush win rate of 27.7 percent, which ranked fifth best among any FBS player with at least 200 pass-rush snaps last year.

Keep in mind: That was just his fourth year as a defensive lineman. Ever.

🤝Great Day to be a Florida State Seminole!!!! #Playmaker @JaredVerse1 is running it back! Been a great week seeing the #NoleFamily and #Tribe 23 come together! Monday the #CLIMB continues! Future is bright in Tallahassee! https://t.co/J5AOur9kBU

Verse’s story is not unlike that of current Patriots edge rusher Josh Uche, who just had an 11.5-sack breakout NFL season. Uche was a 210-pound linebacker in South Florida that Michigan took a chance on. It took him about 2 1/2 years to grow into the body of a defensive end at Michigan, and by his fourth year, he was on the verge of a true breakout. The Patriots jumped the line and took Uche at the end of the second round in 2020.

Even though Verse was on a first-round trajectory, this is still all pretty new to him. There is very little time for rookie adjustments in the NFL. Verse, with some of that NIL money in his pocket, has a chance to keep growing at Florida State.

A 6-4, 295-pound former basketball player, Ruke Orhorhoro was born in Nigeria and moved to the United States at age 9. The cousin of former Iowa and Michigan standouts Michael and Mario Ojemudia, Orhorhoro played hoops at River Rouge in Detroit before trying out for football in the spring of his junior year.

Fast forward to this season. Now a budding standout defensive tackle at Clemson, Orhorhoro posted an impressive fourth-year showing, after catching the attention of many in 2021 when he subbed in for an injured Bryan Bresee. Orhorhoro had five sacks in 300 pass-rush snaps in 2021; in 2022, he improved his pass-rush win rate to 10.2, per PFF. He is a player on the rise at an important position.

With more seasoning, Orhorhoro has a chance to turn a top-100 grade into something much better in his final year with the Tigers. 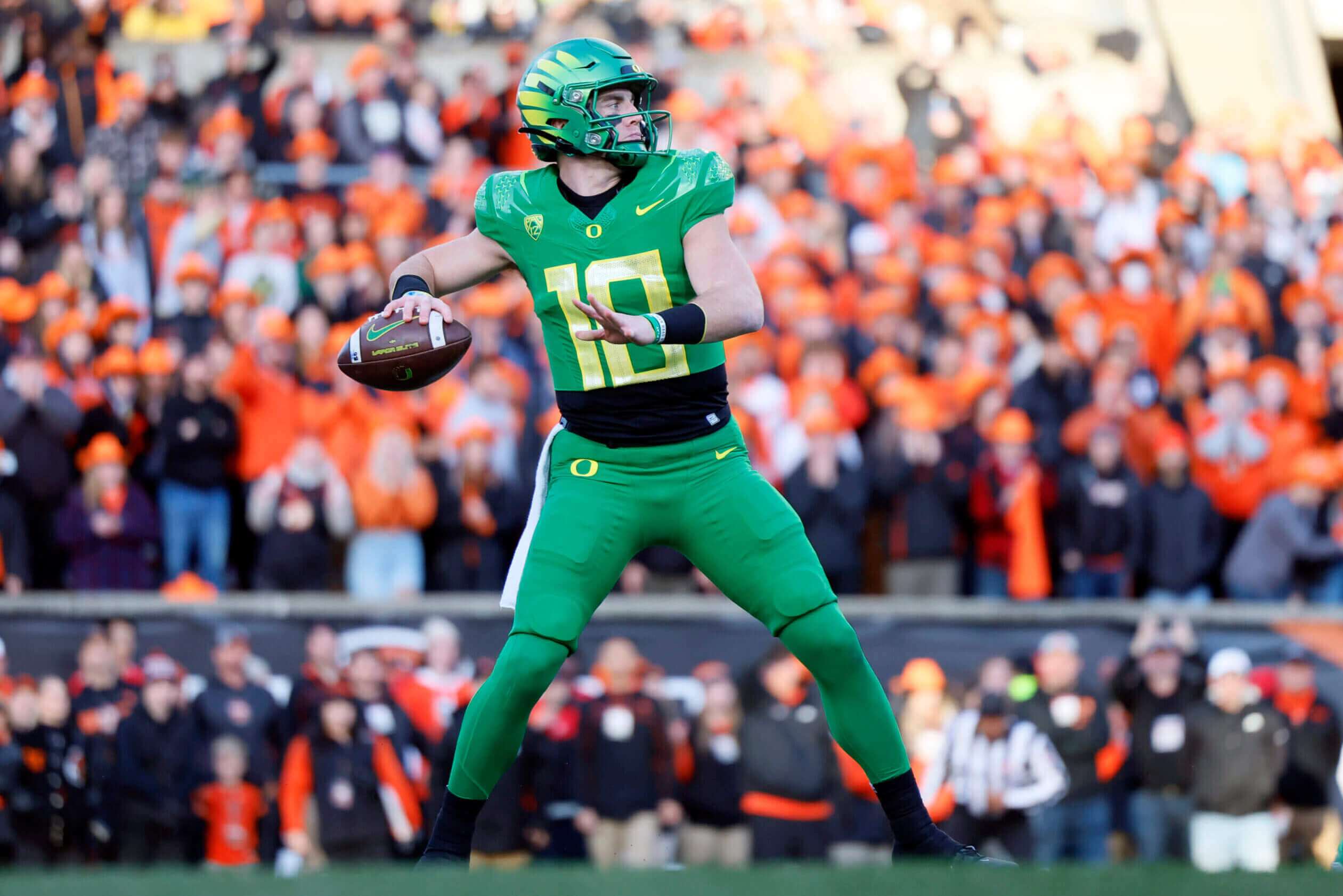 Nix’s 2022 campaign at Oregon was, potentially, career-altering. Where would he have been drafted had he come out this spring? Tough to say. He’ll surely be happy to have the same conversation next spring with a whole lot of money in his pocket and another year of development under his belt. Anyone paying attention to Oregon’s 11th-hour recruiting success in December understands the impact Nike has on NIL and everything that goes with it in Eugene.

A lot of the same goes for Penix, who was able to get his career back on track with Kalen DeBoer at Washington. For Penix, the 2022 season felt like the start of something — the very start of something. He’s been through a lot, so why rush a shot at the NFL?

Rattler has the best chance of climbing of anyone on this list. He’s still just 22 and only about three years removed from being viewed as one of the top underclassmen QB prospects in the country. The talent is all there, as he showed in wins over Tennessee and Clemson this season, he just hasn’t shown enough consistency in college. That might not be the case in a year, though. He’ll get a chance to prove it while earning some money along the way.

There’ll be a new quarterback in Columbus next season, but there won’t be a new QB of the defense. Tommy Eichenberg was as big a reason as anyone for Ohio State’s defensive improvements in 2022. The Buckeyes didn’t solve everything, of course, but Ohio State was much better against the run, and Eichenberg’s nose for the ball led the charge.

The 6-2, 235-pound linebacker still has work to do in coverage and will have to prove he can stay on the field for all three downs in the NFL, but he plays with great eyes and just doesn’t miss tackles. Eichenberg added 15 hurries last season and should only grow as a playmaker with another year in the system.

Had he declared, he would have had a good shot at hearing his name called on Day 2.  The Buckeyes defense will also welcome back safety Lathan Ransom, who will get another year to work with defensive coordinator Jim Knowles. He had 74 tackles and four pass breakups for the Buckeyes this season.

Kansas State rushed for nearly 3,000 yards as a team in 2022 and Cooper Beebe was a huge reason. The Big 12 Offensive Lineman of the Year, Beebe has been a rock for the Wildcats over the past two years, and he absolutely would have heard his name called on Day 2 or early Day 3 this spring.

His return is great news for Chris Klieman’s team. As it was, Beebe was Brugler’s third-rated interior offensive lineman in this class heading into this season. In four years at Kansas State, Beebe has played snaps at left tackle, left guard, right guard and right tackle. He allowed just four QB hits as a left tackle in 2021 and only two as a left guard this year. Over all that playing time, he’s been flagged for six penalties and just one in 2022.

Beebe will be an NFL football player moonlighting in the Big 12 next season. For Kansas State offensive line coach Conor Riley, that’s the greatest news of all.