Xi Jinping has expressed concern about the spread of Covid-19 to rural China on the eve of the lunar new year, in the Chinese president’s most direct acknowledgment of the worsening health crisis since suddenly abandoning his zero-Covid strategy in early December.

Experts have warned that the period could become the biggest superspreader event since the virus first emerged in Wuhan, central China, in late 2019.

Xi, who was speaking at the Great Hall of the People in Beijing, said he was now “primarily concerned about rural areas and rural residents” as China entered a “new phase” of its pandemic response.

China’s most powerful leader since Mao Zedong demanded stronger efforts from lower-level officials to boost medical resources and better prepare for treatment of severe cases. He also ordered “stricter” health measures to be reintroduced at “nursing homes and welfare facilities” given the vulnerability of China’s elderly.

For many urban Chinese, the holiday is their first trip home in three years, but anxiety remains about the spread of infection to less protected rural areas. Prior to Xi’s speech, authorities were already discouraging travel and large gatherings.

After Beijing lifted its zero-Covid restrictions last month, outbreaks surged in urban areas, and internal government estimates suggest hundreds of millions of people caught the virus in a matter of weeks. Authorities reported nearly 60,000 Covid-related deaths at hospitals across the country since the end of restrictions.

Over the past few weeks, officials in multiple rural counties in Hunan, Shaanxi and Heilongjiang provinces have issued warnings, with one local government recommending people “not return to their hometowns unless necessary”. Authorities have also warned internet not to spread “gloomy sentiments” or “rumours” about the pandemic over the holiday.

The caution in part reflects concerns about the poorer healthcare infrastructure and shortages of medicine in rural areas. State media reported this month that a central government agency in charge of rural development instructed local authorities that “availability of medicines in China’s rural areas should be maintained for more than two weeks”.

Zeng Guang, China’s former chief epidemiologist at the Center for Disease Control and Prevention, told officials to focus on pandemic management efforts such as opening designated Covid wards and distributing drugs to the countryside, according to a local media report last Thursday.

“Our priority focus thus far has been on the large cities,” Zeng said. “It is time to focus on rural areas. Many elderly, sick and disabled in the countryside are being left behind in terms of Covid treatment.”

The influx of travel could provide a much-needed economic boost, as Chinese consumers typically spend more on food, alcohol and new clothes during the holiday. “We will see many more consumers engage in tourism, which could help boost overall spending,” said Ernan Cui, China consumer analyst at Gavekal Dragonomics.

But Gavekal’s recent research also suggests that Chinese consumers’ remain cautious with many prepared to delay purchases over fears of themselves or family members catching the virus. Retail sales fell 1.8 per cent year on year in December, an improvement from November’s 5.9 per cent drop, official data showed on Tuesday.

“High-income groups, the ones less affected by Covid and already seeing the benefits of loosened restrictions, are more likely to engage in ‘revenge consumption’,” Cui said, referring to pent-up demand after years of lockdowns. “This is already visible in cities like Beijing. Most people, however, are still a little bit careful.” 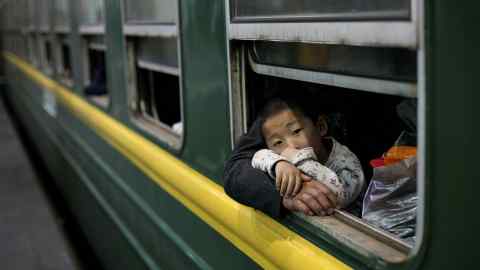 The travel warnings issued by rural counties have not included concrete legal measures and are unlikely to discourage citizens, many of whom remain determined to travel home.

The government’s decision in December to stop publishing daily case data encouraged Li, a 41-year-old migrant worker in Beijing, to buy rail tickets to her hometown in Hubei province. Her hope that Covid was mostly over meant she was not “going to change my travel plans”, she said.

At Beijing railway station, one migrant worker was preparing to return home to Hebei province. “In my village, many people have already been infected,” said the worker. “There are no more official rules. What difference does it make to the government if I go or not?”