Critics of the new government’s proposals for radical reforms to Israel’s judicial system gathered Saturday night to protest for a third consecutive weekend, with a major rally in Tel Aviv and smaller events in other cities.

Police estimated that some 110,000 people were gathered on Tel Aviv’s Kaplan Street and at Habima Square, making it the largest protest yet. Organizers assessed turnout at some 150,000.

Thousands more rallied in towns across the country, including in Jerusalem, Haifa, Beersheba, Herzliya and Modi’in.

Many roads in central Tel Aviv were blocked due to the demonstration, and police forces were out in large numbers to maintain order.

Rally-goers are protesting Justice Minister Yariv Levin’s proposals to shake up the judiciary by severely curbing the High Court of Justice’s judicial review powers and cementing political control over the appointment of judges.

One of the demonstration’s central organizers, the Movement for Quality Government in Israel, said it was acting “against the dangerous revolution that the new government is planning to advance, a revolution that will destroy Israeli democracy.”

As rallies were held, the head of the Knesset’s Constitution, Law, and Justice Committee was reportedly ready to accelerate work on Levin’s legislation. According to Channel 12 news, a private proposal drawn up by MK Simcha Rothman of the far-right Religious Zionism party will be presented to lawmakers for discussion Sunday. Levin’s proposal is still being processed, and the two will likely be merged at some point.

Channel 12 said Netanyahu’s coalition wants a first reading of the bill in the Knesset by February 1.

‘It’s our right to scream’

Arriving at the protest after suffering criticism for skipping last week’s event, opposition leader and former prime minister Yair Lapid told reporters: “What you see here today is a demonstration in support of the country… People who love the country have come here today to defend its democracy, to defend its courts, to defend the idea of coexistence and of the common good.”

“We will not give up until we win,” he added. 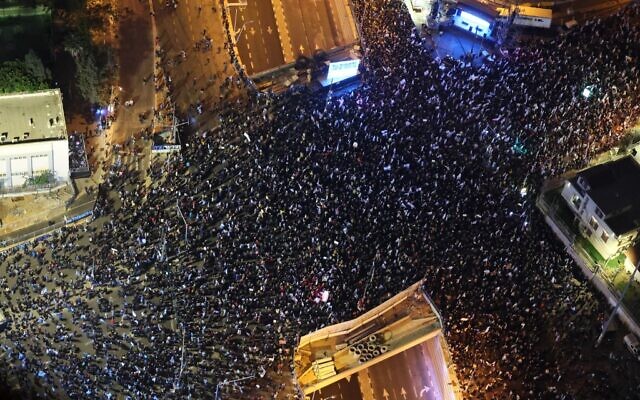 Revered Israeli author David Grossman addressed the crowd. “The State of Israel was established so that there would be one place in the world where the Jewish person, the Jewish people, would feel at home. But if so many Israelis feel like strangers in their own country, obviously something is going wrong,” he said.

“Now is the hour of darkness. Now is the moment to stand up and cry out: This land is in our souls. What happens in it today, will determine what it will be and who we and our children will become,” Grossman said.

“Because if Israel will become different and far from the hope and vision that created it, God forbid, in a certain sense, it will cease to be,” he warned. 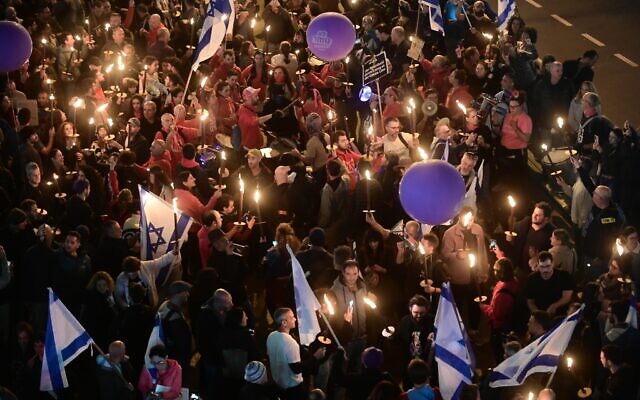 Protesters against the proposed changes to the justice system in Tel Aviv, on January 21, 2023. (Avshalom Sassoni/Flash90)

“A state in which the prime minister will appoint all of the judges, there’s a name for it: dictatorship,” he said.

“The way we stopped Syria and Egypt from destroying Israel, we will stop Netanyahu from doing the same,” he said. “We all enlisted because we care about the state and its future… Democracy will always defeat dictatorship.”

High-tech CEO Eynat Guez told the rally that foreign investment into Israeli companies, a key ingredient to Israel’s high-tech sector’s success, will be threatened if Israel’s democracy is eroded.

Citing $54 billion as the amount of foreign money invested in Israel in the last 3 years, Guez said that erosion of Israel’s democracy will scare away investors. “Those $54 billion won’t be here and the tens of thousands of workers who joined high tech won’t be here.”

Netanyahu has repeatedly said his government received a mandate from the voters in November’s election to enact his party’s plans for sweeping judicial reform.

“It’s a real alarm… We’re not imagining it,” she said. “If you’re the government, think very well what caused all of these people to get off of their chairs” and come here tonight.

“It’s our right to scream, it’s our obligation to scream, that’s how it is in a democracy.” 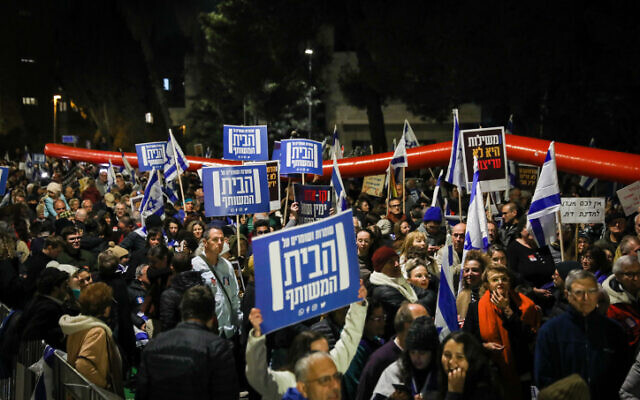 Protesters against the proposed changes to the justice system at the President’s Residence in Jerusalem, on January 21, 2023. (Noam Revkin Fenton/Flash90)

In Jerusalem, Several thousand people demonstrated near the President’s Residence.

The protesters chanted “The people are determined: This is not Iran,” “We’re setting a red line for Levin,” “We won’t be silent as long as there is inequality,” and simply “Democracy.”

“A majority does not legitimize tyranny,” and “Red line: right and left against destruction,” some banners read.

A student band performed followed by speakers, including several students, as well as Shaul Meridor, son of Dan Meridor who served in several ministerial positions in past governments. 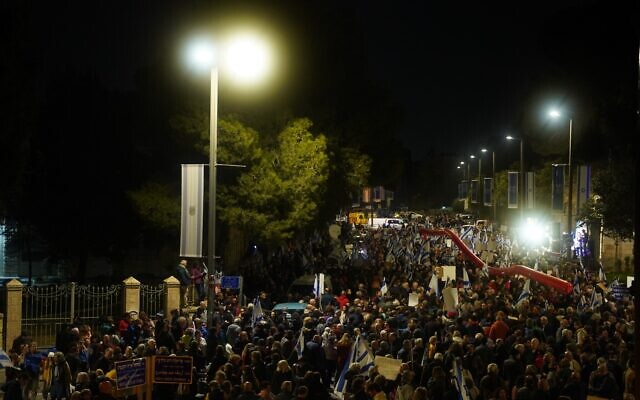 Protesters against the Netanyahu-led government gather outside the President’s Residence in Jerusalem, January 21, 2023. (AH/Times of Israel)

“Democracies fall slowly and quietly,” said Meridor. “We have to fight and battle. This isn’t about Arab or Jew, religious or secular, this is our home that we have to protect.”

Judge Nava Ben-Or, former head of the Jerusalem District Court, listed the judicial reforms suggested by the government, enumerating the ways in which she said they ignored the basic tenets of democracy.

A handful of pro-Netanyahu protesters with banners reading “leftist traitors” held a counter-demonstration, but were kept away from the main protest by police. 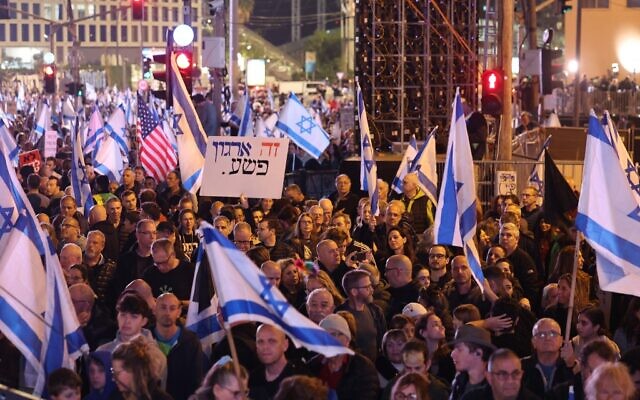 “What happens at the end of the day is we have a person who doesn’t care about the state and he’s prepared to do many things to get out of his trial,” said Assaf Abrahamovitz, 44, from Hadar Am. “This will hurt all of us.”

One protester, US expat Robert Barack, said he’d come out to protest the “fascist government” he said was threatening civil liberties.

Barack waved a rainbow flag emblazoned with the Star of David, and is marching alongside protesters from the gay community. 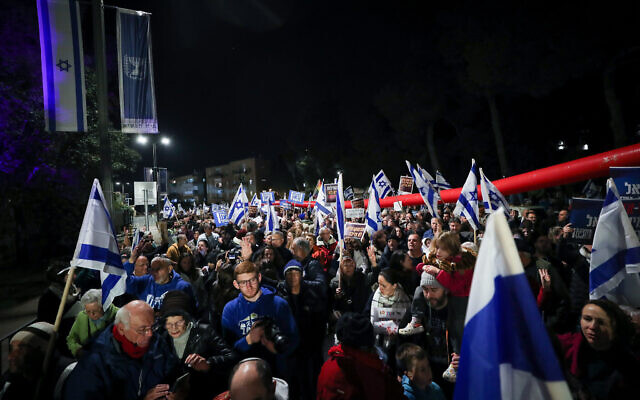 Protesters against the proposed changes to the justice system at Habima Square in Tel Aviv, on January 21, 2023. (Jamal Awad/Flash90)

“The Zionist dream includes a state with equality… I have a gay son, he’s in the States now, getting married. He can’t do that here, he’ll probably stay there,” he said, adding that “ministers in this government want to discriminate on the basis of sexual orientation.”

Among the demonstrators were some anti-occupation protesters — despite criticism that connecting the evening’s rallies to Israel’s policies toward Palestinians may muddle the message and alienate some people. 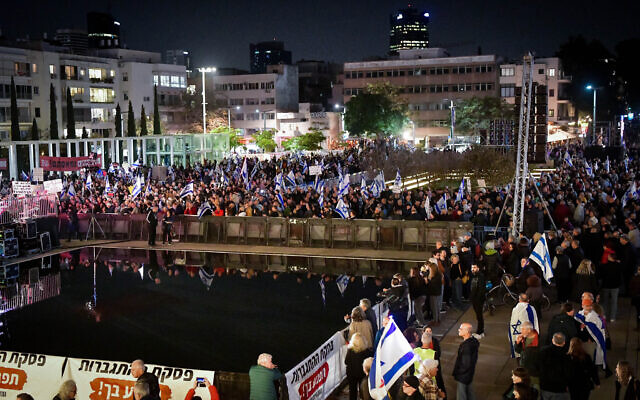 Protesters against the proposed changes to the justice system at Habima Square in Tel Aviv, on January 21, 2023. (Avshalom Sassoni/Flash90)

“I think that there is no deluxe democracy. Either we have democracy or we don’t have it,” explained Ziva Weiler, 67, who arrived from Rehovot.

Gantz had called for Israelis from across the political spectrum to come out on Saturday in a video posted to social media on Friday.

“No matter what your political positions are, on Saturday night everyone will take to the streets to tell the government — yes, it is possible to reach broad agreements [to draft reforms more acceptable to the public] but we must not run over what the country’s founders wrote in the Declaration of Independence, and what we built here for 75 years,” he said.

“We march to say yes to reforms and no to vengeful measures that will dismantle Israeli resilience and democracy,” he added. 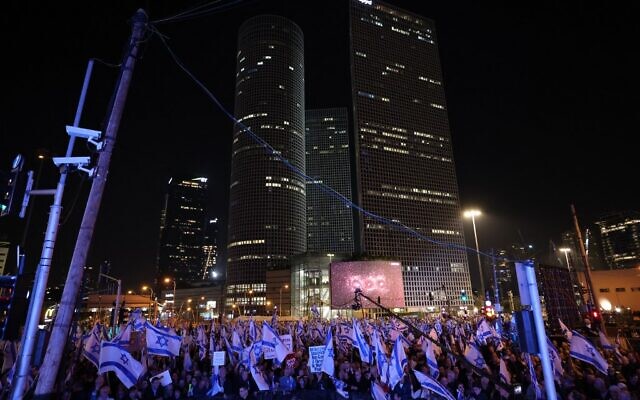 MK Gideon Sa’ar,  the No. 2 in National Unity, said Friday he would also be attending the protest and called for members of his right-wing New Hope subfaction to join the rally after being absent from the last demonstration.

“We are at the peak of the struggle for the future of Israel. There is no left and right in the struggle to protect the democratic regime. This fateful struggle by the country’s citizens is for the benefit of our children’s future in this land, a struggle forced on us by a dangerous and unrestrained government,” Sa’ar wrote to party activists over the Telegram messaging app.

Later in the night, protesters in Tel Aviv held a march with torches down several main roads in the city. After the march, police reopened all the roads that had been closed for the demonstration. 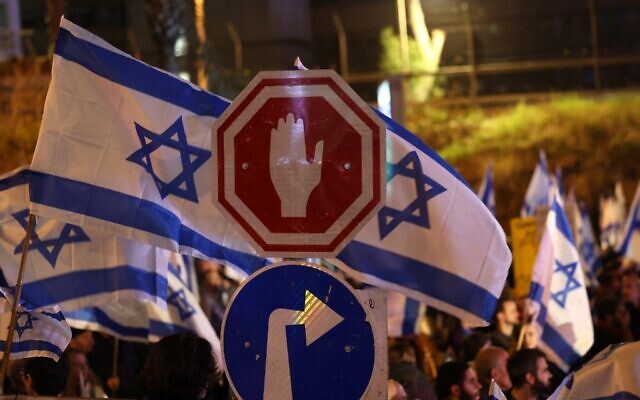 The latest demonstrations come days after government officials reacted with anger and promises of swift reforms to the High Court’s decision Wednesday to disqualify Shas leader Aryeh Deri as minister over his criminal convictions. The coalition is now scrambling for a way to bypass the decision and give Deri another high-ranking role.

Following last week’s large protest, Netanyahu brushed off the criticism at the weekly cabinet meeting and argued that the planned changes would strengthen democracy rather than hasten its end. He also maintained that the government is carrying out the will of the people.