At Portia and Curtis’ place, Portia vents that she won’t let Spencer worm his way into Trina’s heart again. Curtis warns her to tread lightly as she could push Trina right into his arms. Portia needs another drink when suddenly there is a knock at the door. It’s Taggert, who is back in town. He came right after seeing the photos of Trina with Spencer in the paper, and wonders if he should be worried. Curtis feels they need to give Trina space to figure out her own life, but Taggert tells him that he’s not Trina’s father.

General Hospital Preview: Rage Erupts With the Truth That Nina Is Willow’s Mother Is Finally Out 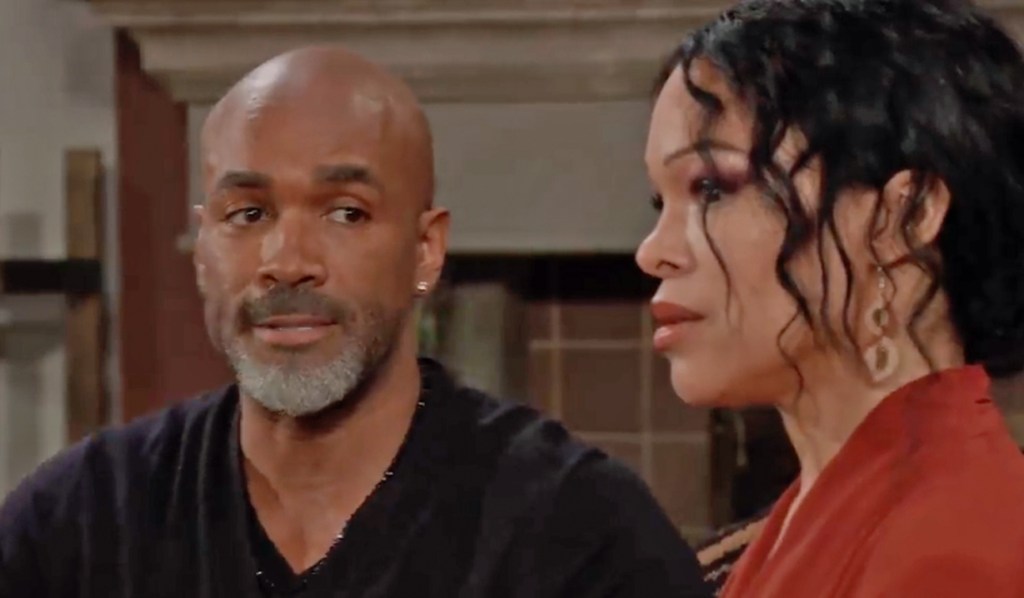 Curtis knows he’s not Trina’s father, but he speaks from experience that Trina doesn’t like people telling her what to do. Taggert stands with Portia and won’t let their daughter get mixed up with the Cassadines. He asks them to have Trina call him later. Taggert heads out, and Portia tells Curtis that Taggert can be territorial. Curtis gets that and will keep his parenting advice to himself until they have one of their own. Portia looks concerned. 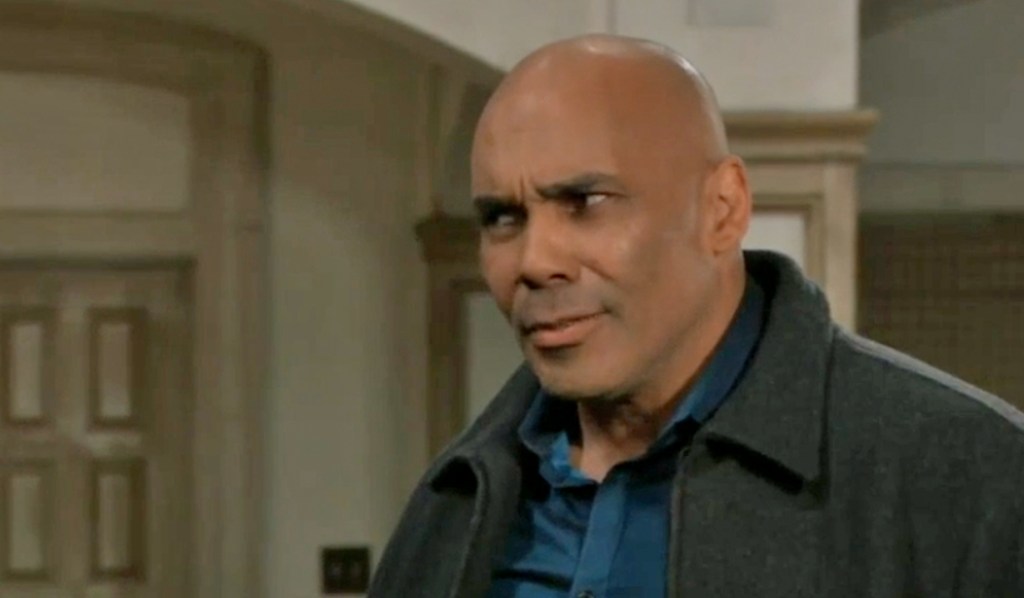 Portia asks Curtis if he really sees himself being a father. Curtis would love nothing more than to continue the Ashford name with a child of his own.

Diane meets with Spencer at Sonny’s and he explains wants to hire her to get custody of Esme’s baby. Diane says for this to happen Esme would have to be stripped of all parental rights, and frankly, Laura would have a better chance at going for custody. He asks if a sibling could gain custody. Confused, Diane quickly realizes Nikolas is the baby’s father. Spencer asks if he has any chance. Diane says this is a complicated situation, but Spencer recalls Michael gained custody of Avery. Diane reminds him it was short-lived and Michael returned the girl. Spencer says if he has it his way, this baby will never know either of their parents. 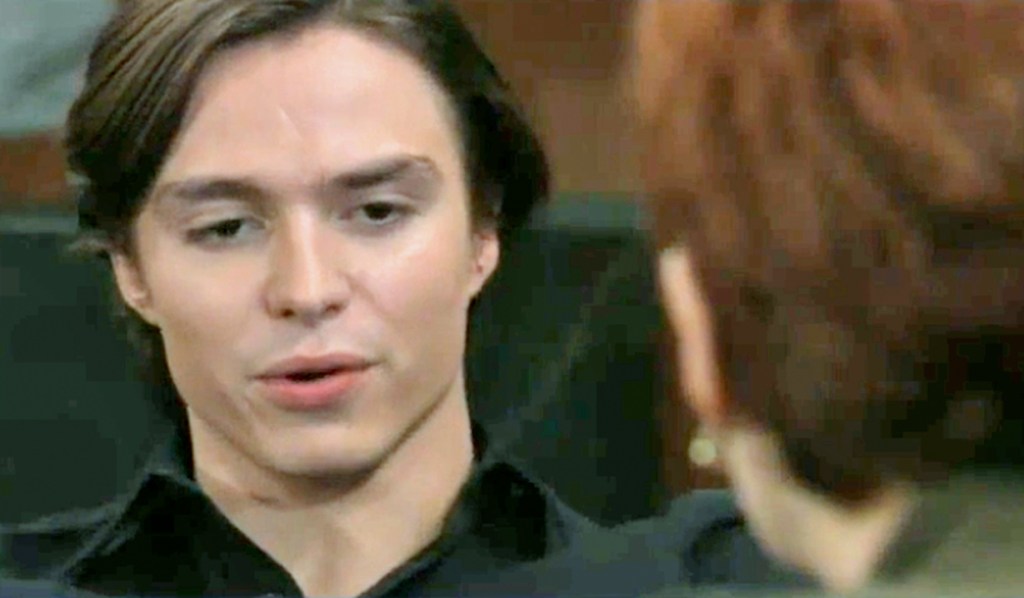 Diane asks if this is about the child or revenge. Spencer admits taking this child from his father is just icing on the cake. He states Esme is dangerous, and his father is toxic and damaging. He won’t watch his father damage another child’s heart and self-esteem the way he did his. Diane says that was well said, and they can put forward that argument. She reminds him that stripping parental rights from two parents is a long shot, and he’ll be playing defense after two stints in Pentonville. She warns him she can’t guarantee him a win. 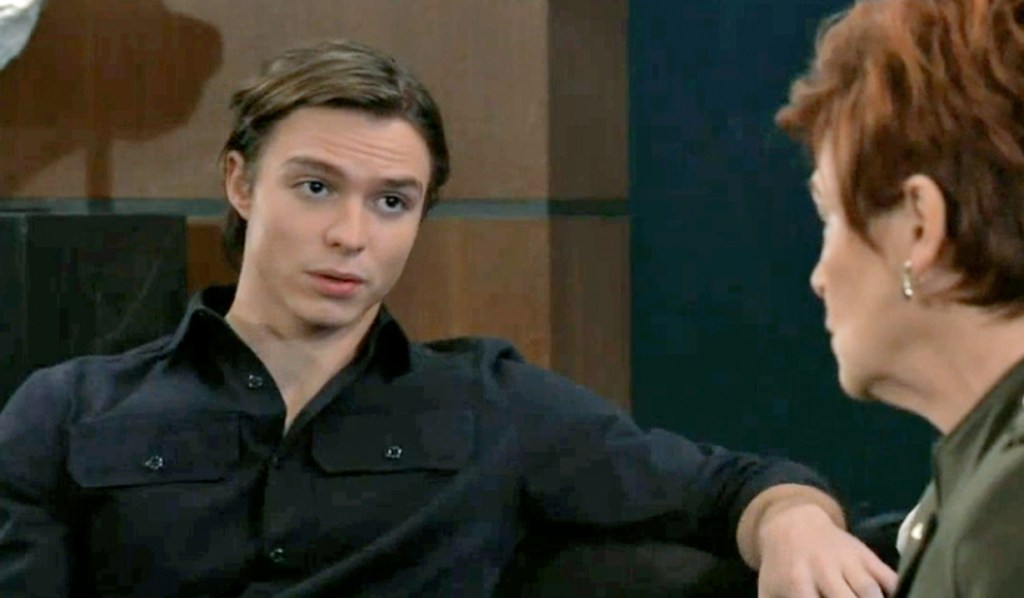 Diane agrees to take his case. She counsels him to think long and hard about how far he is willing to go because this wildfire will rage with unforeseen consequences once it is lit. 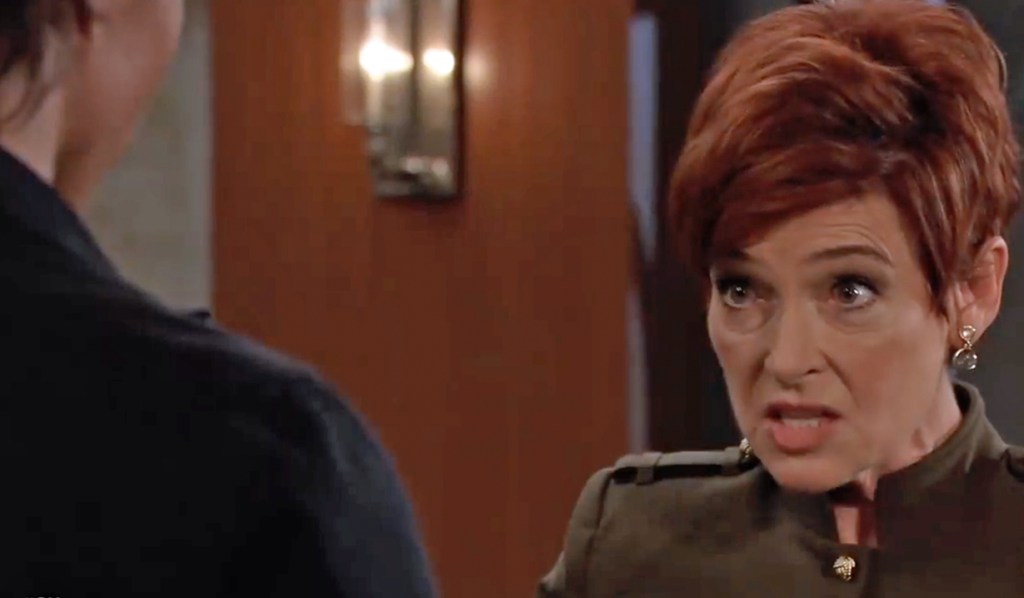 More: Will anyone be left on team Carly?

In the hospital chapel, Nikolas tells Liz that there is no evidence of Esme at Wyndemere, thanks to Victor, who knows everything. However, he promises Victor doesn’t know of her involvement as he kept her out of it. If it comes to it, he vows to take all the blame. Right now, he’s worried more about Esme talking. Liz doesn’t think she’ll remember any time soon. 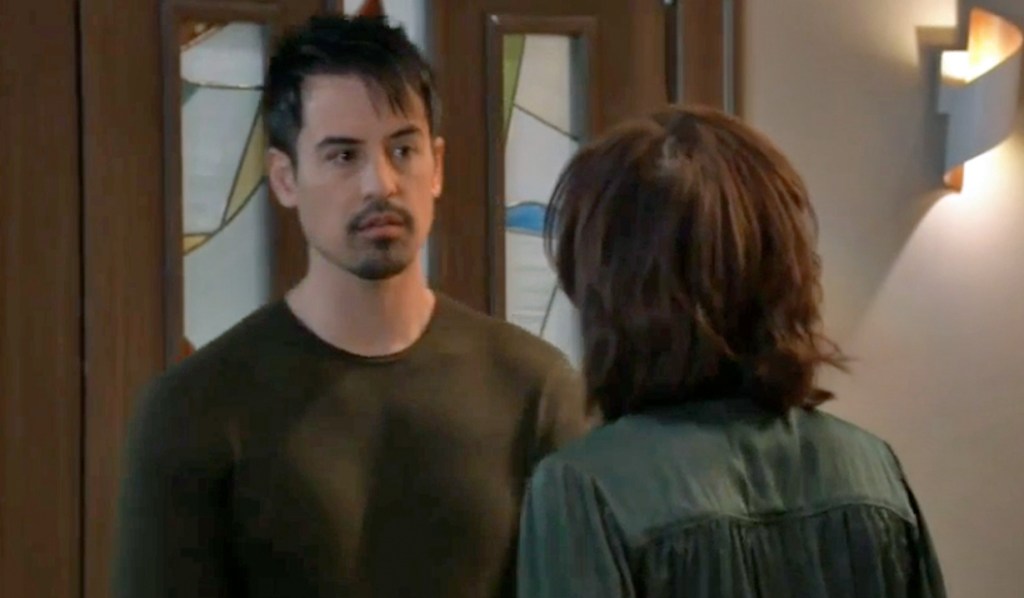 Nikolas forgot to ask if she ever found out why she was losing time. She did and gives him the short version of what her parents did to her and why. She has some empathy for Esme as she’s been where she is, struggling with lost memories. She wishes there was a way Esme would never get her memory back, but that’s next to impossible. Liz leaves, and Nikolas mumbles, “Never say never.” 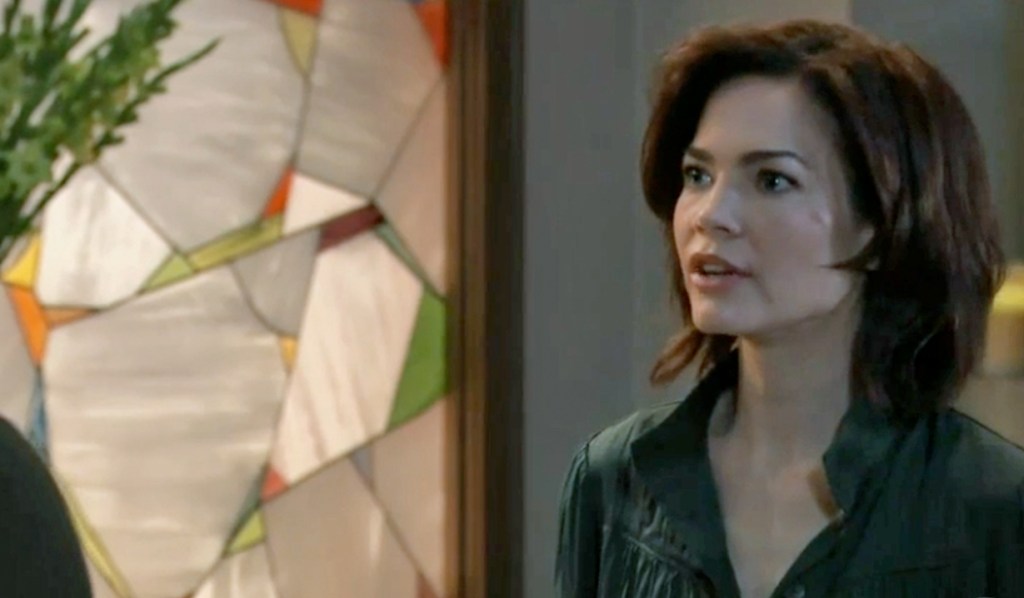 In her room, Esme wakes ups and is alarmed to see Laura sitting there. Laura apologizes for startling her. Esme asks how she got in here, and Laura has the same question for her. Laura wonders where she’s been, and how she ended up here with hyperthermy. Esme wishes she knew and asks if they know one another. 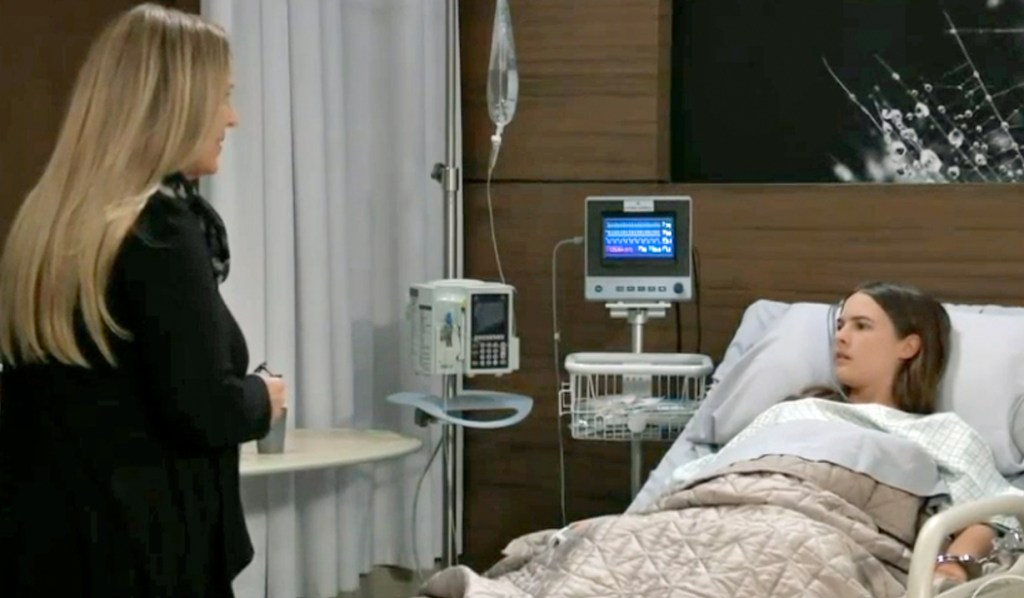 Laura introduces herself as the mayor, and the grandmother of the baby she’s carrying. Esme perks up and asks if Laura is Spencer’s mother. She explains she’s his grandmother, and Nikolas is her son. Esme is confused, so Laura shows her photos of both Spencer and Nikolas. Esme identifies Spencer as her baby’s father. Esme explains Spencer came to visit her and told her that he may be the father of the baby. She asks if the other photo is of Nikolas. 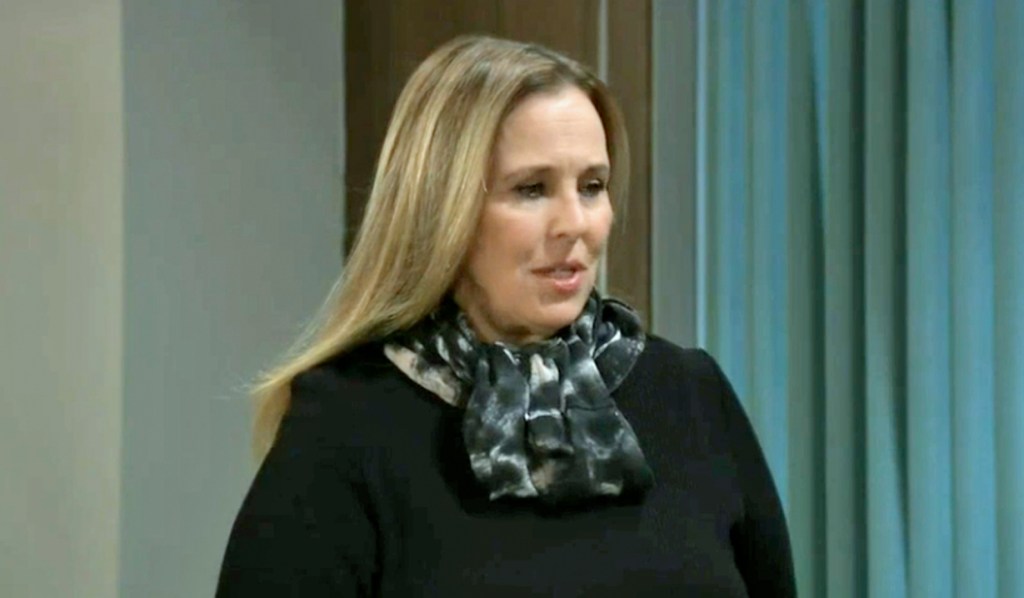 In the halls, Carly tells Sonny and Drew that Nina is getting tested at this moment. Sonny is confused, and Dante interrupts having just heard about Willow. He says he stopped by her room, but Michael and Nina were there. Carly is taken aback that Nina is in Willow’s room. She asks Drew to take Dante, who offers to be tested, to the lab. 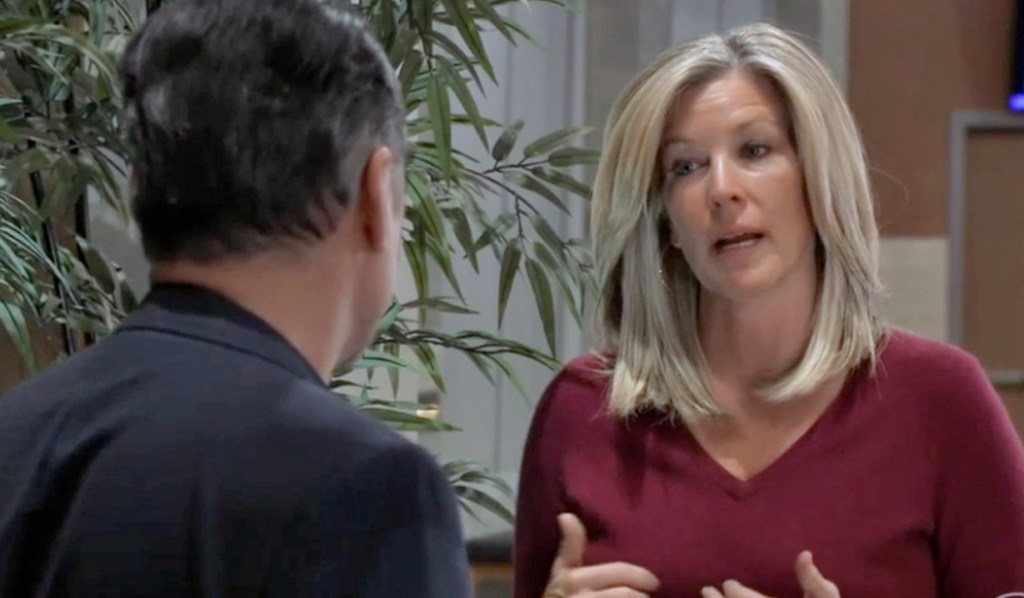 Alone, Carly admits to Sonny that Nina is Willow’s mother. Sonny asks how Carly knows this. She reveals what Harmony told her. He wonders how long she has known as Harmony’s been dead for months. Carly deflects that the details don’t matter right now, but Sonny says they do as she kept her mouth shut. He asks why she waited so long to come forward. Drew returns, and Sonny asks if he knew about this too. Drew says he only just found out the truth. An argument erupts, and Sonny accuses Carly of doing this for revenge against Nina. She reminds him how much Nina has hurt Michael and Willow. 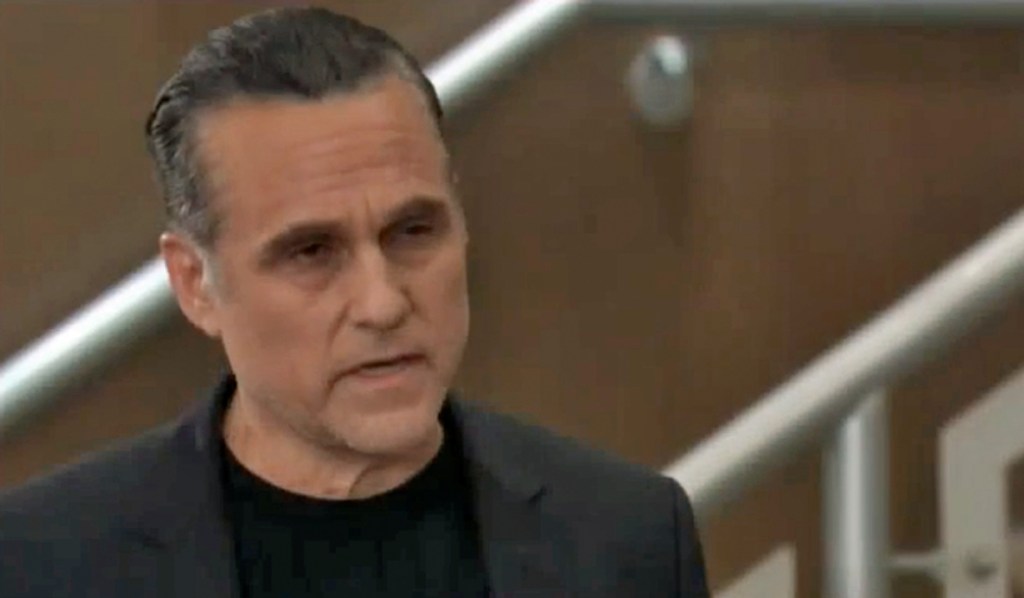 In Willow’s room, Nina tells Willow that her life may depend on her. Willow orders Nina out, but Michael tells Willow that she needs to hear Nina out.  Nina apologizes for all their arguments, and for all the ways she’s disappointed her. Willow calls it lip service and it means nothing. Nina cries this time is different, as she is her mother. Willow laughs and tells her that she lost her mind. Nina insists it’s true, and they were kept from one another and lied to. Willow asks Michael if he can believe this. Michael does and tells her it’s true. 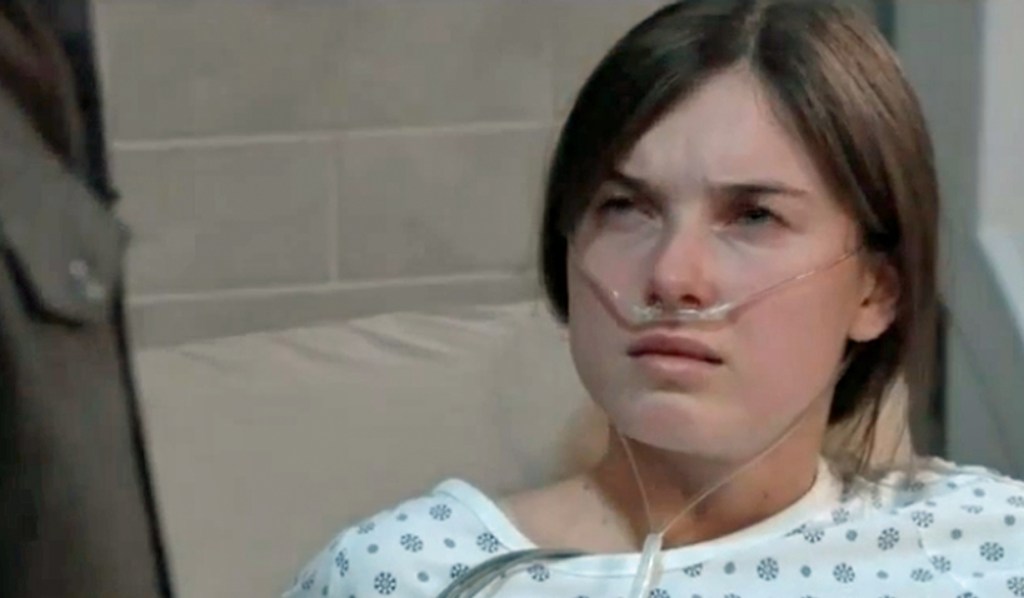 Michael tells Willow that Drew found out the truth about Nina, but only after she was hospitalized. Willow knows she doesn’t have much time left, and she needs to know how this happened. Nina explains she had no idea she had twins, and her mother gave Nelle to the Bensons and her to Harmony. Willow thinks back to the fact that she fought her own sister in court for custody. Willow realizes she suddenly has two blood relatives. Nina says she has more than two, there is James and Obrecht. Willow gasps that Wiley is her nephew. Willow asks Michael for a moment alone with Nina, so he leaves them. 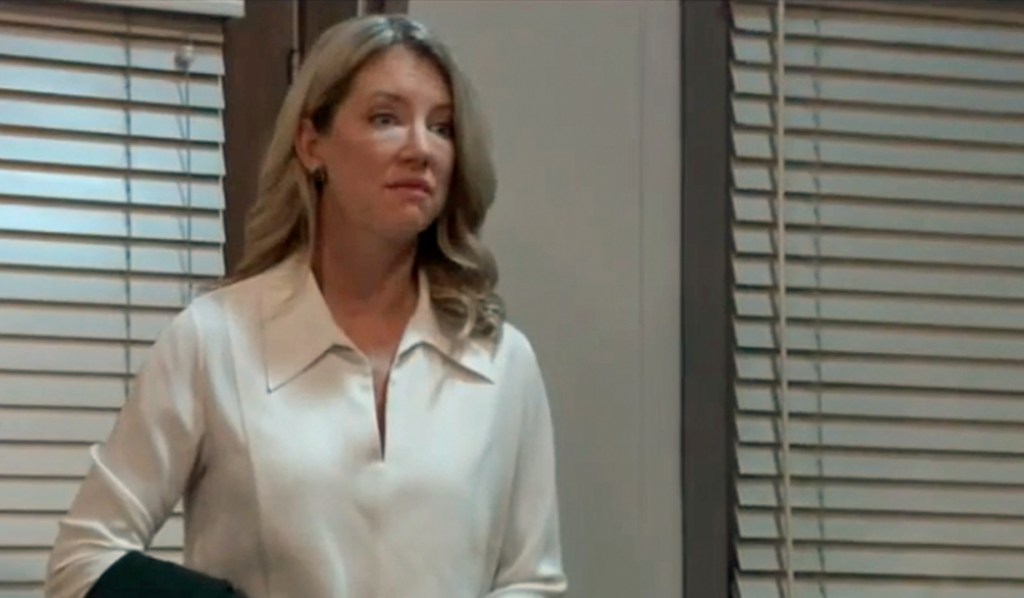 Nina sits by Willow and says she knows this is a lot. She cries that she looked for years for her child, only to find them after she had lost them. Now she has another daughter who needs her. She hopes they can rebuild a new relationship from here, in spite of their past. 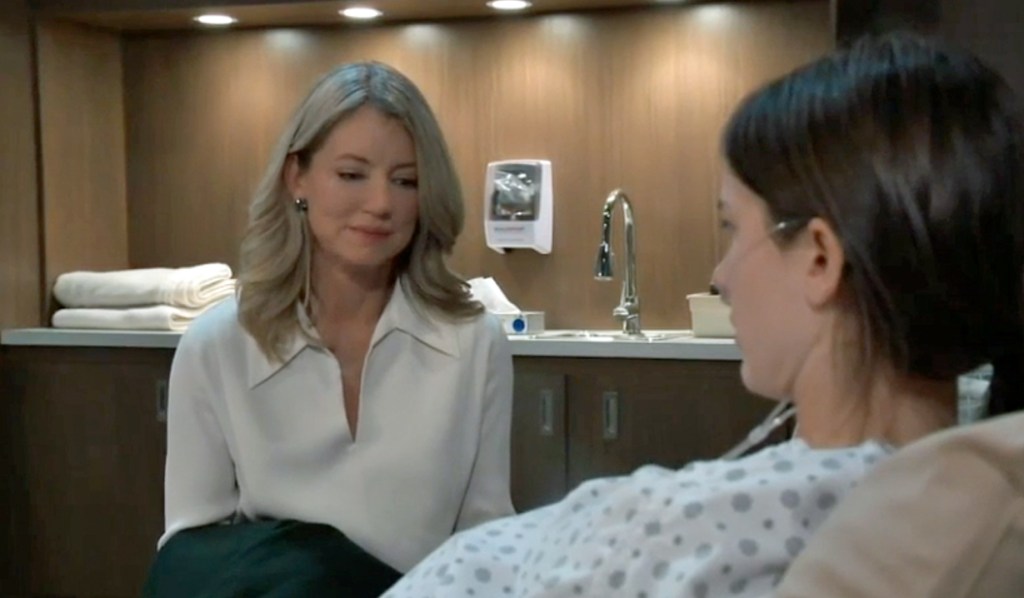 Willow informs Nina that this changes nothing between them. She will accept they are biologically related, but she is still the same woman who has actively worked to destroy her and her family. Nina explains she was left broken and untethered when she thought she lost her only link to her only child, and Willow should understand that grief more than anyone. She says a crime was committed against them both. She vows she couldn’t save Nelle, but she’s going to save her. 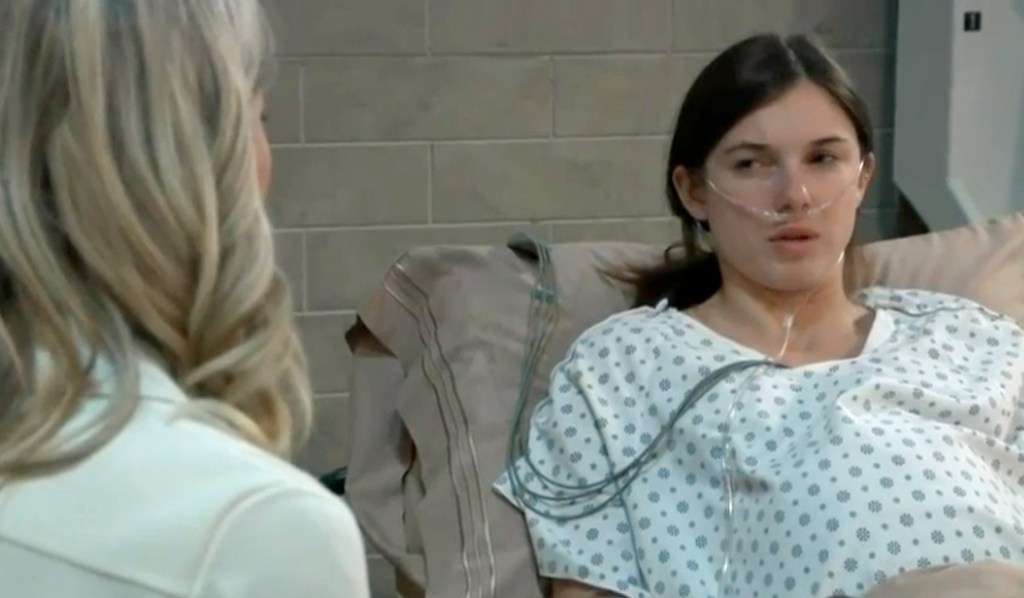 Back in Esme’s room, Drew interrupts Laura and Esme’s conversation on police business. He shows Esme the photo of the ornament she had on her. Esme notes it doesn’t look familiar. Laura looks at the photo and thinks it appears hand painted. Dante is hoping to find out who made it, which could give them answers to where she’s been. Dante asks Esme to call him if anything comes to mind. She refuses to help the cops build a case against the woman she was.

More: The other co-star Laura Wright fell hard for

Back in her room, Esme looks at the ornament photo and has an almost calmness on her face.

Michael finds Sonny and Carly arguing and tells them enough. He says Willow is going through hell knowing the woman she hates is her mother. Carly doesn’t understand why Nina went to her room in the first place. Sonny tells Carly she doesn’t get to dictate what Nina does. Michael tells Sonny he needs to talk to him and takes Sonny aside. 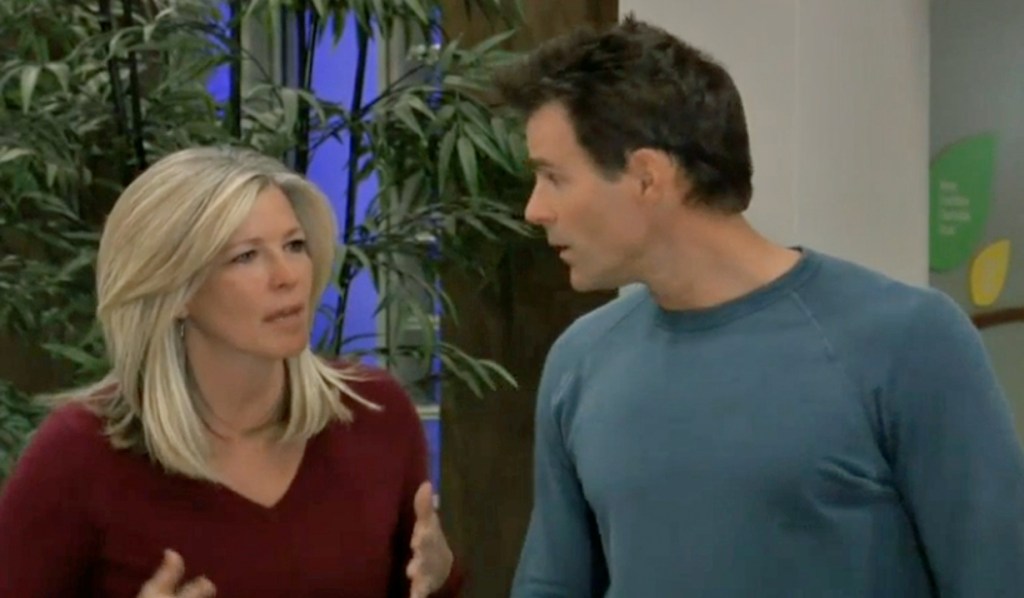 In private, Michael vents to Sonny over what his mom did, but he needs Sonny to deal with his feelings about what mom did away from him and Willow. Sonny can do that and asks how he is holding up. He doesn’t care about himself, he only cares about Willow. Sonny says he’s doing all the right things he can right now as a father and a partner. Michael decides to get back to Willow. 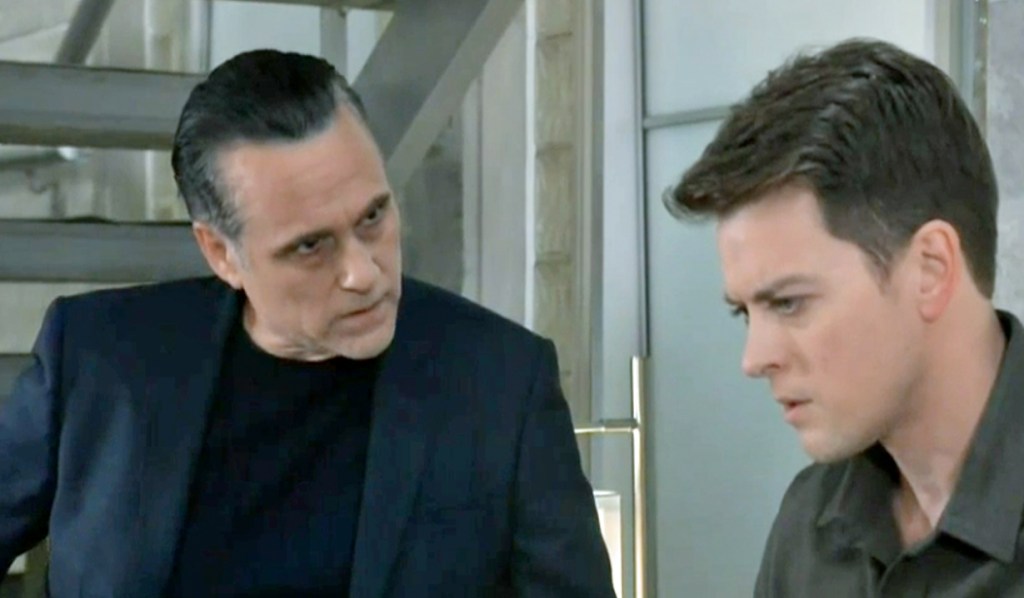 Meanwhile, Carly knew Sonny would be angry, but cries to Drew that Michael couldn’t even look her in the eyes. She thanks Drew for not making her feel worse.

Back in Willow’s room, Nina tells Willow that she is her best chance at being a match. Willow asks what she wants in return. Nina cries, “Nothing, I didn’t come here to emotionally blackmail you.” Willow only knows she doesn’t trust her. Nina states nothing may ever change her mind, but she is her daughter and she won’t let anything stop her if she can save her life, not even Willow herself. Nina exits.

Michael returns to Willow. She cries, “Why her? Why couldn’t have been anyone else.”

Nina runs into Sonny and sobs, “I have a daughter. It’s Willow, and she wants nothing to do with me.” He embraces her.

On the next General Hospital: Anna tells Valentin, “Shut up or give up.” Victor warns Esme he’s not one to challenge. Chase says eventually one’s luck runs out. Michael fears Willow’s biggest threat is herself. Sasha asks Willow if she’s thinking of refusing the transfusion. Sonny assures Nina that as long as there is life, there is hope. In his cell, a standing Ryan tells Heather, “Alone at last,” as he looms over her.

Before you go, be sure to check out our photo album of the best-ever primetime soaps ranked.

If you follow a link within this story, we may receive a small commission of the sale.