Vegan babies could be at risk of serious health problems, dietitians have warned, after the NHS published advice on the diet in infants.

The NHS Start for Life website, which provides guidance for new parents, now includes a section about vegan and vegetarian babies.

It recommends that infants on a vegan diet may need vitamin B12 supplements and advises that parents can give their baby plant-based drinks like soya, oat and almond milk, after the age of one, if the drinks are unsweetened and fortified with calcium.

The NHS warns that cows’ milk and dairy foods are good sources of nutrients, so parents should not cut them out of a child’s diet without first speaking to a GP or dietitian.

Vegan babies could be at risk of serious health problems, dietitians have warned, after the NHS published advice on the diet in infants (file photo)

But some dietitians and nutritionists have raised concerns about babies of being vegan at such a young age, as growing numbers of cookbooks are also published with recipes for vegan infants.

While most experts believe a vegan diet for children can be safe, risks may arise when parents do not rigorously ensure meals and snacks are properly balanced.

Dr Duane Mellor, a registered dietitian and lead for nutrition and evidence-based medicine at Aston University, said: ‘If a baby or toddler does not have enough energy and protein, this can affect their growth.

‘If their diet is low in iodine, or they become iron-deficient, it can affect their brain development and even reduce their intellectual capacity.

‘If their diet is low in B12, it can not only lead to anaemia but also impact their nerve development.’

As a vegan for more than six years, Francine Jordan has always planned to bring her baby up on the same diet. 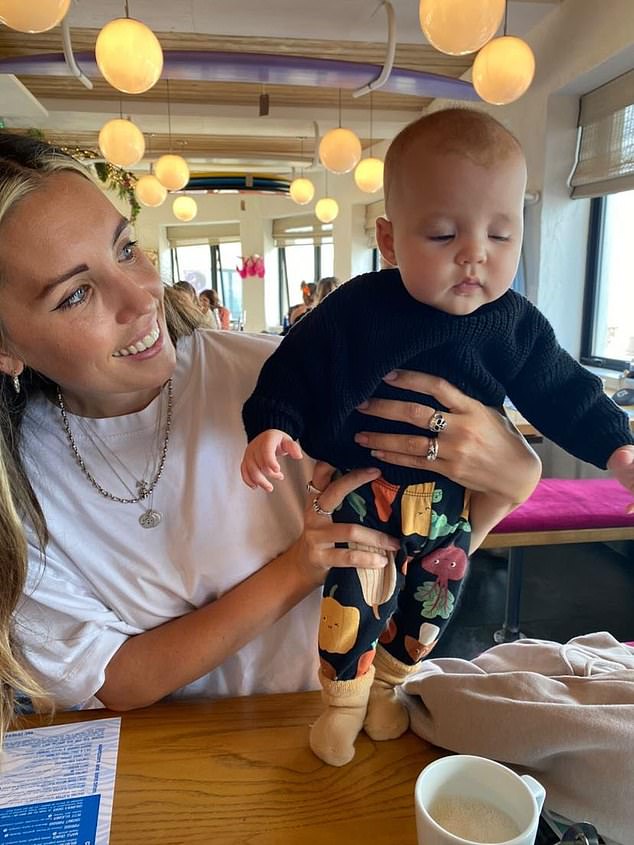 As a vegan for more than six years, Francine Jordan has always planned to bring her baby Peggy (pictured together) up on the same diet

When five-month-old Peggy is weaned, her first finger foods will include courgette, cauliflower and tofu.

Miss Jordan has done an NHS course on baby nutrition to be prepared and will give her baby extra supplements including vitamin B12 and iodine.

The 32-year-old said: ‘Bringing up Peggy on a vegan diet was not a conversation I needed to even have with my husband, as we are both vegan.

‘If we have chosen this way of life because we are concerned about animals and the environment, it would then be strange to feed our baby meat and dairy.

‘This actually will be really good for her, and she is likely to grow up less fussy about food, having been exposed to all these vegetable flavours.’

Miss Jordan, who works as a press officer for the Vegan Society, first asked to be a vegetarian at the age of eight, but was told no by her mother because it would be too difficult to make separate meals.

She adopted the diet as an adult, then became vegan after working on a farm in Australia while travelling.

The new mother plans to breastfeed for as long as possible, and has sought advice from her health visitor on providing Peggy foods like pasta and bread, tofu for calcium and lentils for protein, as well as consulting the childhood guides on The Vegan Society’s nutrition page. 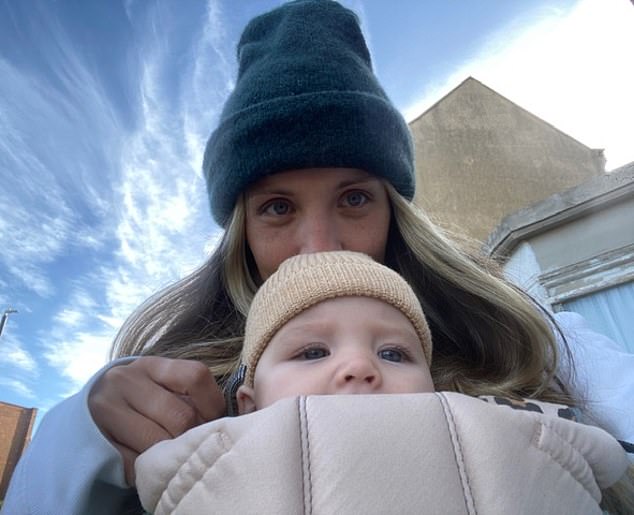 The mother-of-one, who lives with husband Davie Carvill, 36, in Margate, said: ‘I’m not stressed about giving vegan food for Peggy, as it is second nature for us to think about diet.

‘We actually haven’t had any bad reactions to what we are planning to do, and I know other vegan mums who feel uncomfortable about preparing meat and fish for their babies.

‘But we will never force her to do anything and if, when she’s older, she does some research and comes to us to say she wants to eat meat or dairy, that will be fine.

‘We just want to bring her up to think about being kind to animals.’

A study last year led by University College London, including 187 vegan, vegetarian and meat and dairy-eating children aged five to 10 years old, found children on vegan diets were on average three centimetres (1.2 inches) shorter, suggesting they were growing more slowly, or potentially could be smaller as adults.

Plant-based brekkies that ARE good for your baby

Vegan breakfasts suitable for children 12 months and under may include:

Vegan children had a lower bone mineral content, although they also had less body fat and lower levels of bad cholesterol.

There has been little research on veganism in babies but Bahee Van de Bor, a former paediatric dietitian at Great Ormond Street, who now runs the company UK Kids Nutrition, said: ‘If you plan plant-based diets carefully, by including a good ratio of carbohydrate foods and fats from vegetable oils, nut butters, avocado and other higher energy foods like hummus, you can meet a baby’s daily energy requirements.

‘But without careful planning for total energy and nutrient requirements, there can be gaps in nutrition which can compromise growth and increase risk of nutrient deficiencies.

‘Parents should not ignore the advice to use dietary supplements for calcium, vitamin D, B12 and iodine, and include foods containing Omega-3, to make a vegan diet safe from birth.

‘A baby’s brain grows rapidly in the early years, so adequate nutrition is crucial to support this early brain development.’

The NHS website, which was updated to include vegan babies in March 2020, states: Infant formula (based on either cows’ milk or goats’ milk) is the only suitable alternative to breast milk for babies under 12 months old.

‘Soya-based formula should only be used on medical advice.’

The health service signposts parents to the First Steps Nutrition Trust website, which states: ‘It is important to note that meeting the nutritional requirements of babies and young children will be challenging on a vegan diet, and using fortified foods and some supplements will be essential.’

Child nutrition expert Dr Carrie Ruxton said: ‘Adults on vegan diets have to ensure they mix up their protein sources, for example eating plenty of beans, lentils and wheat, but this may be harder for babies or young children to achieve since they can be fussy eaters.’

Charlotte Stirling-Reed, a baby nutritionist and author of the book How to Wean Your Baby (SUBS – pls keep), said: ‘I think the NHS should be offering the information out for those who are interested, and allowing parents to make their own choice.

‘Vegan diets can be safely given to babies and toddlers as long as planning is done to ensure that young children’s nutritional needs are met.’

A spokesman for the Department of Health & Social Care said: ‘Advice on the weaning hub ensures parents have the support and confidence to introduce their babies to solid food and ensure their baby is getting the nutrition it needs.’

Chantal Tomlinson, a dietitian at the Vegan Society, said: ‘If parents do their research, and plan carefully, they can provide a totally plant-based diet with appropriate fortified foods and supplements which contains all the essential nutrients needed for growth and development.

‘There are many plant-based foods rich in protein, iron, and zinc, such as beans, chickpeas, lentils and tofu, and iron absorption can be boosted by including a rich source of vitamin C in each meal, such as broccoli, cabbage or mango.’