YouTube TV is introducing design refreshes for the Library and Live tabs this month, expected to reach subscribers shortly. The team over at YouTube has posted a big writeup on all of the various changes and the philosophy used to reach these results. While all fascinating, I’m sure, let’s just stick to what’s new about it.

Mainly, it’s more compact. On the Library tab for example, there was a section to jump into categories on the left, with a page of six titles on the right. There’s not a ton to digest. On the refreshed Library tab, there is a lot more going on. You have title thumbnails, categories below that, followed by even more (but apparently sometimes duplicate) title thumbnails.

With that, wording may get confusing as YouTube TV shows both text for “New” and “Unwatched,” even though they seem to be used interchangeably.  Looking at the After image below, you can see there’s a new episode of Night Court, but the Night Court thumbnail below only shows the text “New.” It appears there is a new episode of Mayfair Witches, too, but then the thumbnail below that specifically says “1 Unwatched.” It seems a little confusing as to what’s new versus what I have and haven’t watched. Maybe it’s just a bad render YouTube is using here, I don’t know. 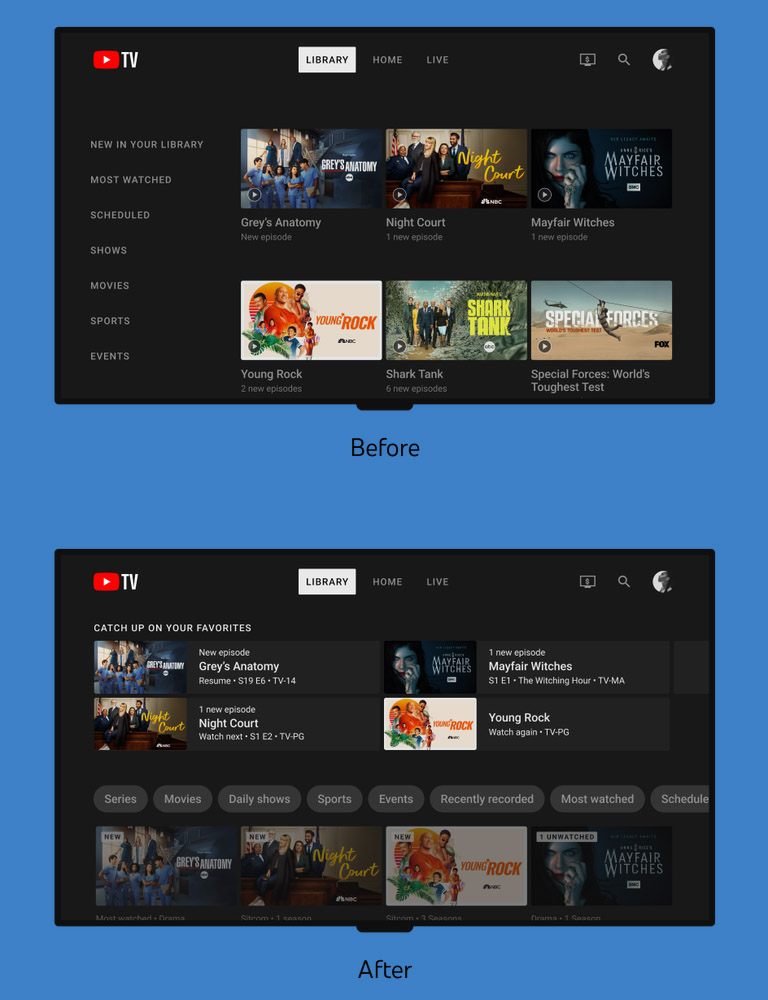 For the Live tab, not much is changing, but for certain actions, there’s a new slide out menu. It was designed for users not to be taken away from whatever it is they were doing originally on the Live tab. Other than that, it looks pretty darn similar to what we already have.

You’ll find these changes popping up in YouTube TV starting this week.